From an early age, Graham Barnes was a devoted Outer Banks Daredevils fan. Attending games with his father, District Court Judge Edgar Barnes, Graham would collect stray baseballs to the point where he’d be able to fill a five-gallon bucket by the end of the season. Even more important, recalls Edgar Barnes, “he thought those players were heroes…Graham absolutely worshipped those ball players.”

About a dozen years ago, the Barnes family began an annual and rewarding tradition of hosting the young players who came to the Outer Banks for the Daredevils season. “We had a great crop of young men that stayed with us during the summer. We met all their families,” Edgar Barnes says. “If you ask our children, it would be one of the best experiences of their childhood.

Then last summer, the story came full cycle. Graham, a student at Appalachian State, played left field for the Daredevils.  “It was a dream come true,” says Edgar Barnes. 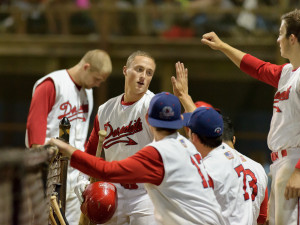 As the Daredevils, who debuted in 1997, prepare for their new season of collegiate summer baseball on the Outer Banks, they are not just an added attraction for the throngs of summer visitors. The franchise’s roots are deeply embedded in the community—through sponsorships, host families, events and fans. (Full disclosure: Several years ago, during a one week stay in the Outer Banks, my family went to three Daredevil games. And the Sentinel is a sponsor of the Daredevils this season.)

“We are very appreciative of the support of our sponsors and host families throughout the years,” says the Daredevils’ General Manager Mike Dooley. “We couldn’t do it without them.”

While the 2015 schedule has not been finalized, Dooley expects the Daredevils to play about three dozen games between June 1 and August 6. Games are played on weeknights and the games are at the First Flight Baseball Complex in Kill Devil Hills, where the team moved in 2005 after originally playing in Manteo. After the franchise went dark for the 2012 season, it was resurrected the following year after being bought by a group of local businessmen, led by Donnie Just, owner of Tranquil House Inn & 1587. 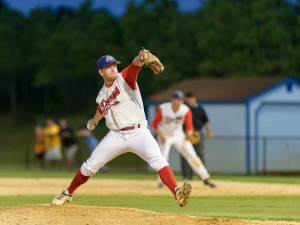 One of the many local organizations that has worked with the Daredevils is the Dare Education Foundation, which has also sponsored the team.

“The Daredevils stand for family, fun and drug-free and healthy lifestyles,” says the foundation’s executive director, Elisabeth Piff. “It was a good fit with the Education Foundation. They do so much for the community.”

Dan Hardy, president of Joe Lamb Jr. & Associates whose son plays ball for First Flight High School, also lauds the value of the Daredevils as a local institution. “We think it’s a good thing for the community and we’d like to enhance it and see it grow,” Hardy asserts. “It’s a nice family event.

Another perspective on the team’s value—as a tourist attraction—is offered by Tim Cafferty, president of Outer Banks Blue Realty and the chairman of the Outer Banks Tourism Board.

“I think it certainly fits into the fiber of our typical family-oriented vacation,” he says. “Put yourself in the [shoes] of the visitors who are with us,” during the summer months, looking for family entertainment at night.

And then there is, of course, the visceral pleasure of relaxing in a beach ballpark on a balmy summer night. Edgar Barnes says one reason for his devotion to the Daredevils is that “it gave me an excuse to sit for two hours and not think of anything but baseball. Watching baseball for me is like taking a cruise.” 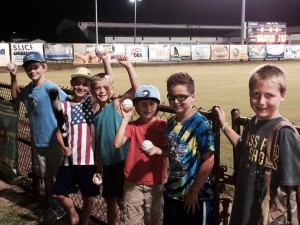 And with preparations for the 2015 season well underway, Dooley is looking for sponsors and host families and the kind of community support it takes to keep the franchise flourishing.

“We are hopeful [that] our business community and local families will once again step up to the plate and join us in our efforts to continue the great tradition of collegiate summer baseball here in the Outer Banks,” he says, “and provide our local community and the thousands of vacationers who join us here each summer with the opportunity to enjoy America’s favorite pastime.”